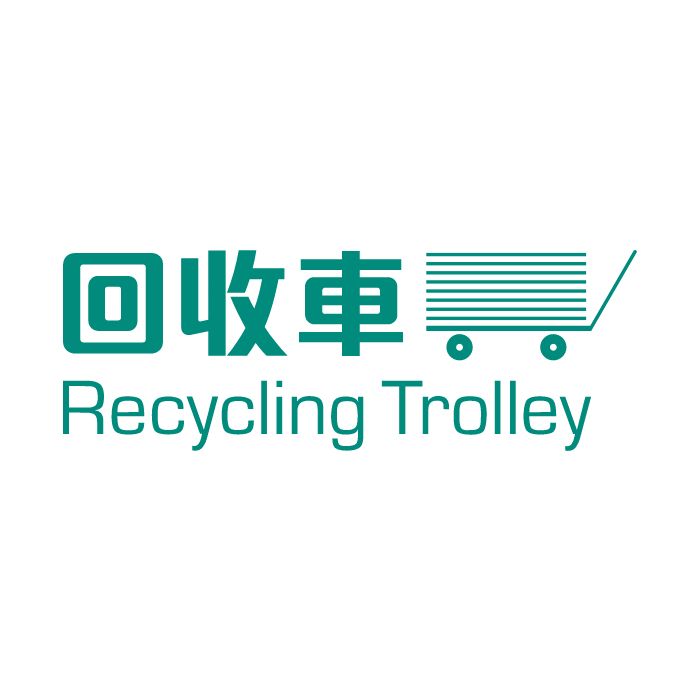 Many grassroots elders in Hong Kong are engaged in waste picking for meagre income in order to survive in the community. They make significant contributions to waste recycling, but they are generally neglected by society. Iron trolley for cardboards recycling is the “working buddies” of elderly waste pickers. “Co-designing an Iron Trolley for Cardboards Recycling” is one of the Action Projects. The aim of the project is to pool together efforts from different parties to re-design the work trolley used by waste pickers in order to reduce their work strain, increase their work safety and uphold their dignity.

Trolley Co-designing Team were formed to research on the feasibility of the ideas to re-design the working trolley for waste pickers. The new features included installing brakes, uplifting to the kerb, stabilising the cargo, and expanding the volume of the trolley etc.  Four “Recycling Trolleys” were produced for testing.

The signature feature of the new trolley is its “down-to-earthness”. Based on the most popular iron-trolley on the market, it is made to be safer, more labor-saving and adaptable to the local environment. 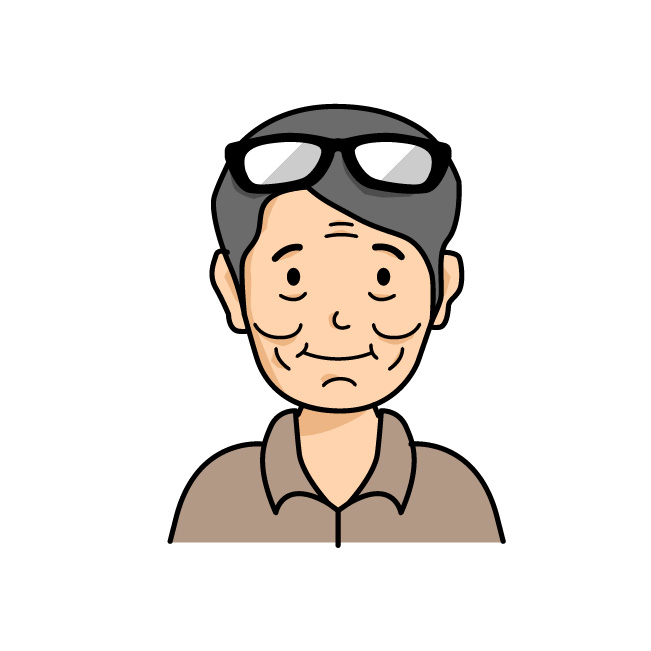 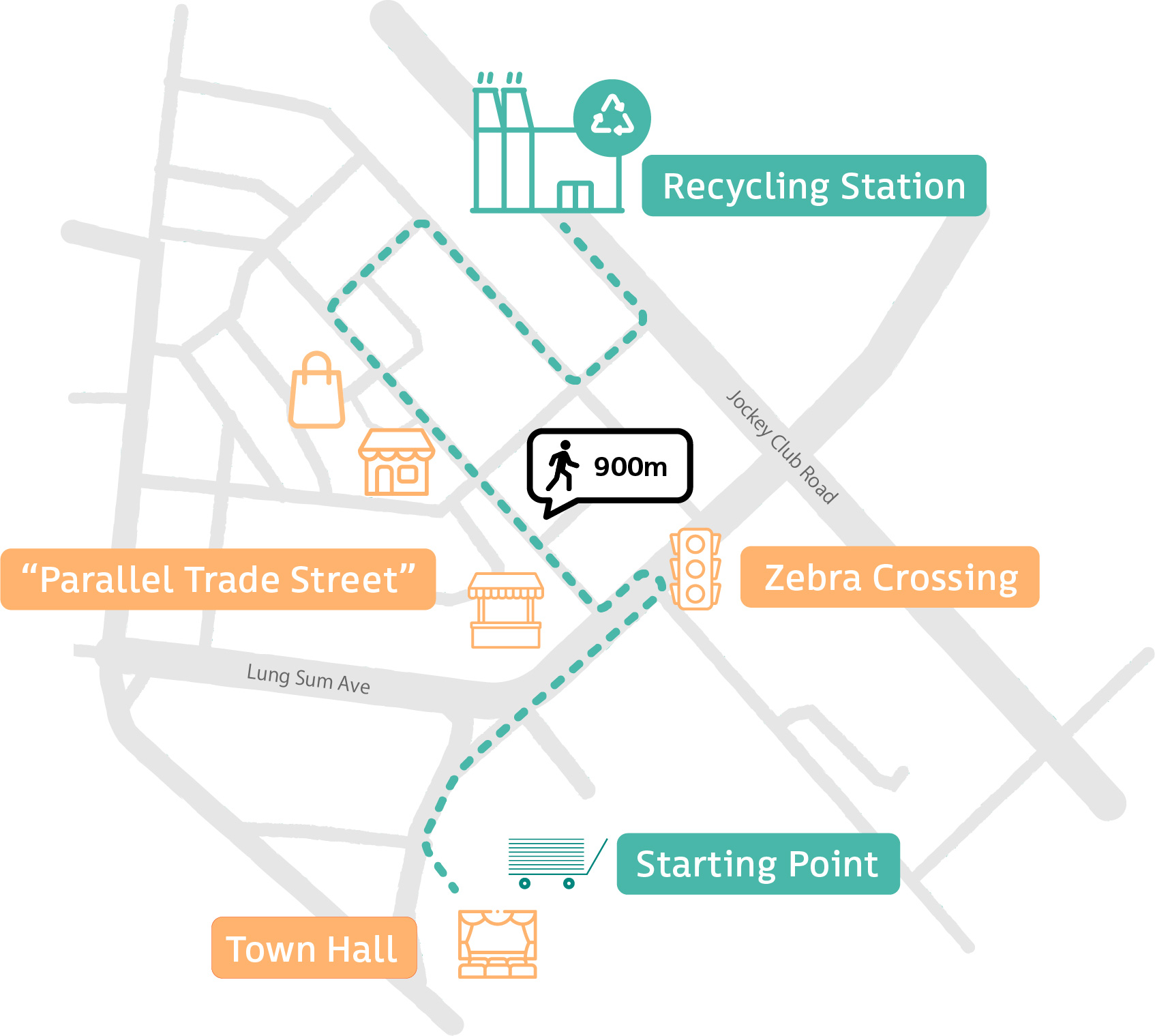 Ms Wong tries to uplift the trolley to the kerb

The members of the co-designing team instruct Ms Wong how to use the Recycling Trolley properly. 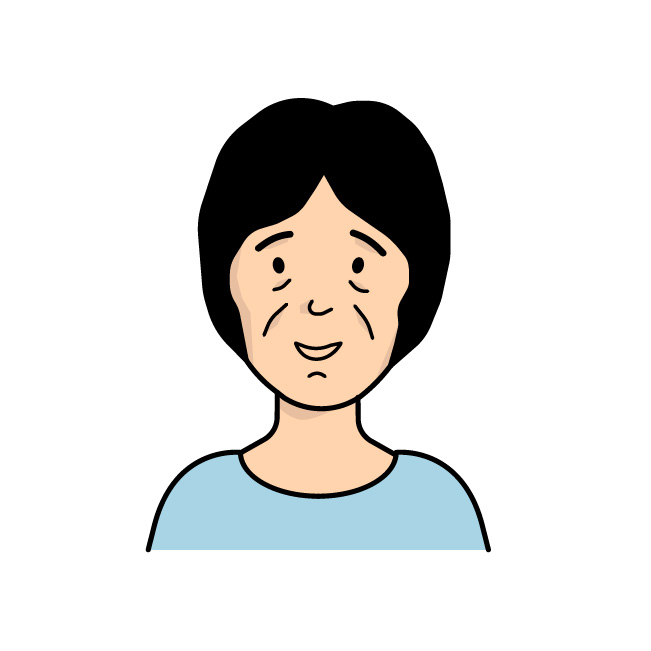 Granny Orchid is a relatively high collection capacity waste picker. In addition to cardboards, she also recycles styrofoam boxes, scrap metals. Granny Orchid’s acts are mainly in the Chun Yeung Street Market. She usually collects styrofoam boxes and cardboards outside the shops and temporarily gathers the recyclables in the corner of the street. Later in the day, she carries the recyclables to the recycling station for sale. Her daily route is moving eastward along Java Road, about 450 meters, passing two intersections. How Granny Orchid used the Recycling Trolley is different from the original design intents. She walks through the main road side by side with cars. The road section is relatively flat without needing to climb up to kerb. However, she likes to work with two trolleys at the same time, pushing the Recycling Trolley in the front with one hand and pulling another trolley at the back. 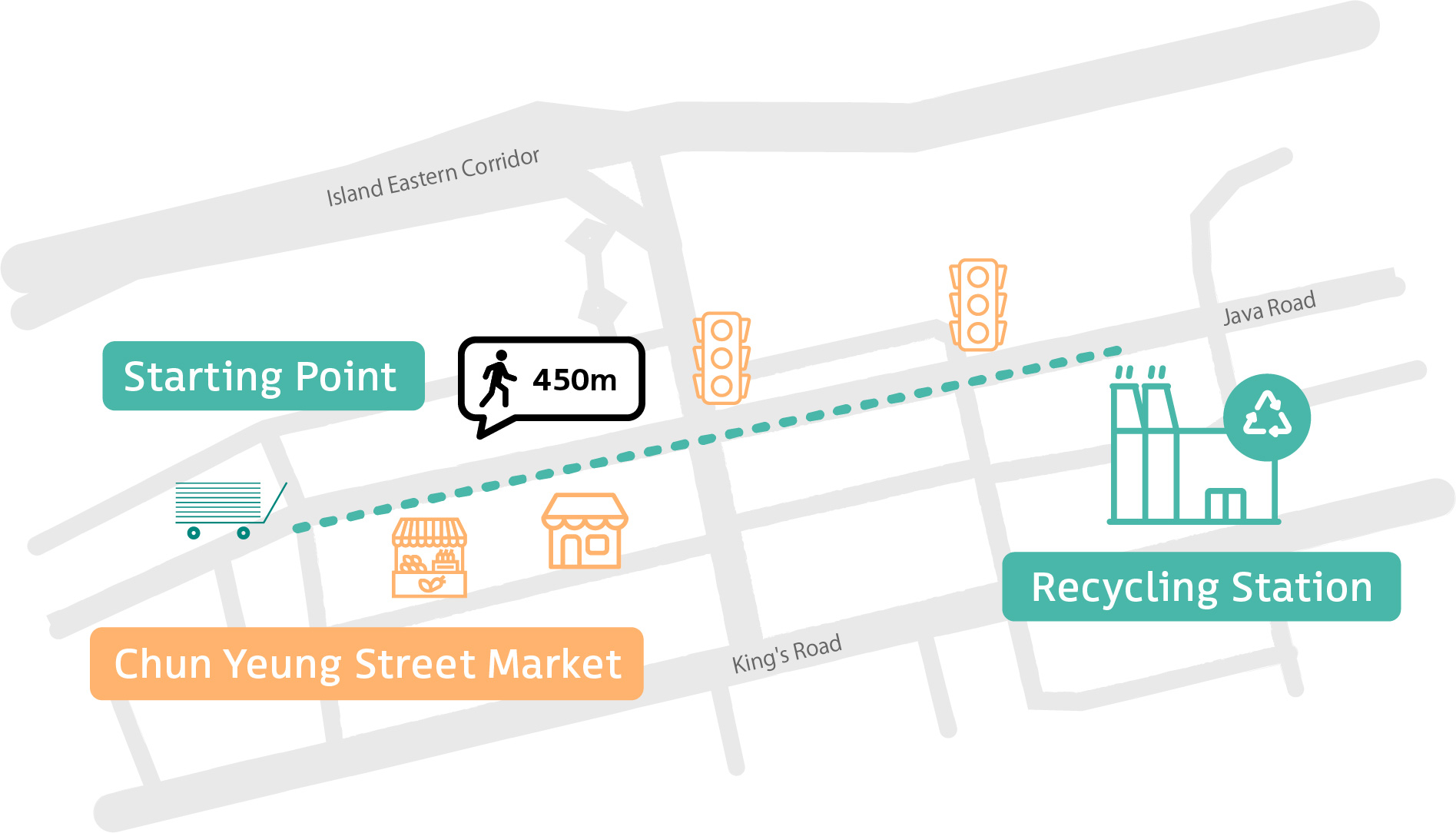 Granny Orchid is pushing two trolleys at the same time 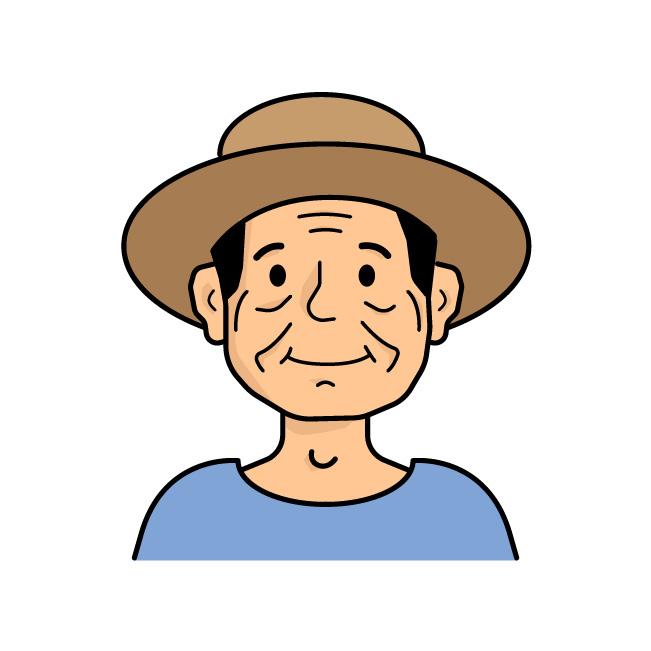 Mr Chan and Mrs Chan work in the back alley of a fruit shop. They are responsible for collecting cardboard papers or waste plastics from the fruit shop and transport them to a recycling station nearby. The whole recycling journey for Mr Chan is about 450 meters, turning from Ma Tau Wai Road to Wuhu Street and then to Bulkeley Street. The process involves three turns. Mr Chan usually chooses to walk on the main road.

The road sections used by Mr Chan in To Kwa Wan are not flat, but slight bulge in the middle and are oblique along the roadsides and corners. Therefore, Mr Chan thinks that the front wheels of the Recycling Trolley cannot be rotated too easily. 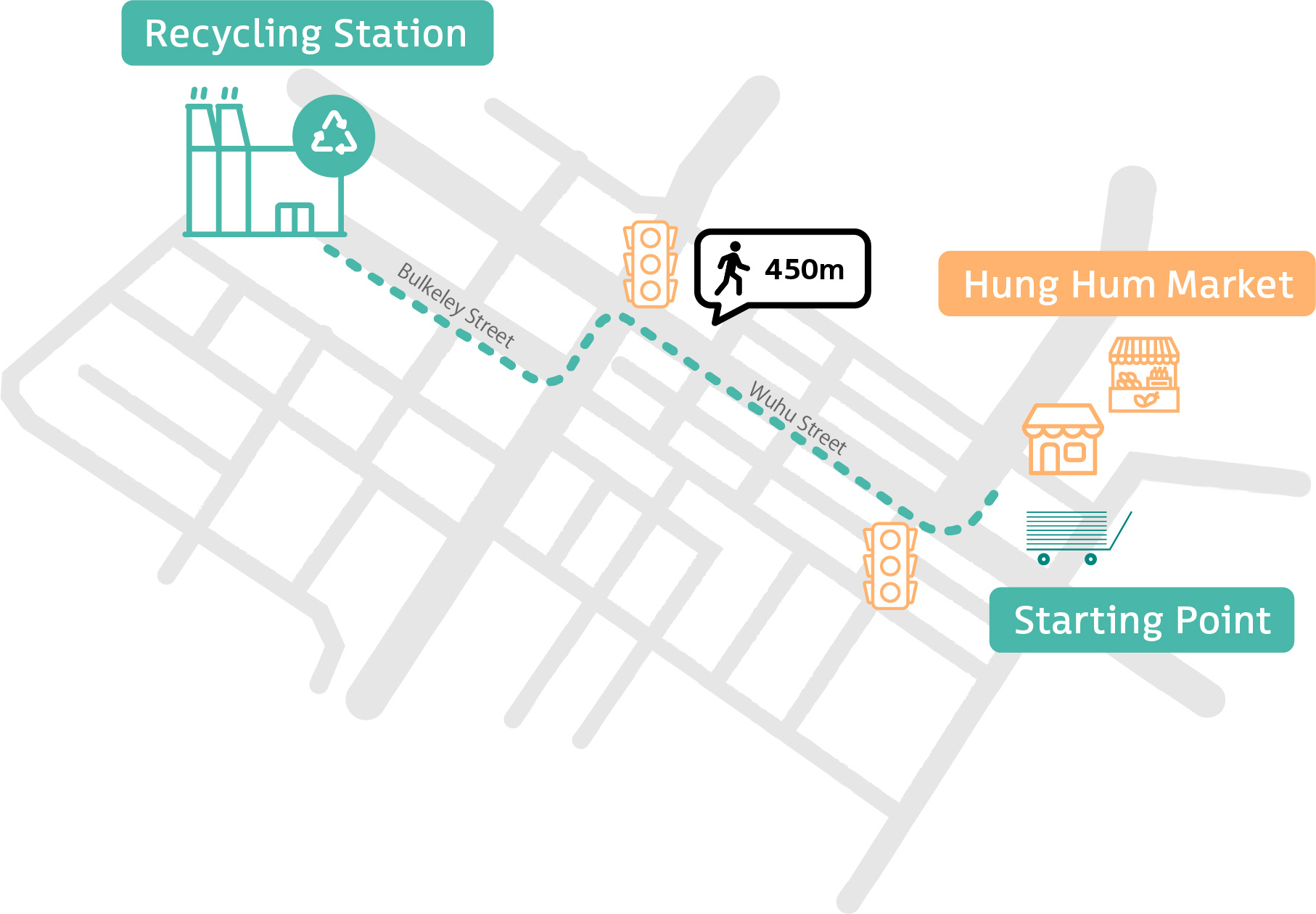 Mr Chan listens carefully to the designer’s explanation of the functions and usages of the Recycling Trolley. 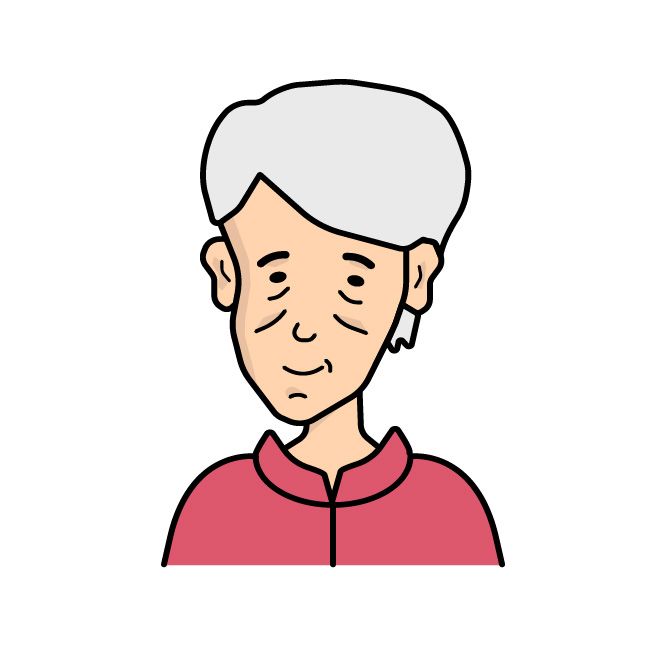 Ms Au is the waste Picker in Kwai Fong
She was invited to test the Recycling Trolley from March 19 to July 2, 2020

Ms Au in Kwai Fong works every day on Che Fong Street, sorting the trash dumped by the nearby shops. The recyclables include cardboards, styrofoam boxes and some metal recyclables. As the quantity and price of the cardboards are low, she often stores them for several days until a significant volume for selling to recycling station. Her recycling route runs from Che Fong Street to Hing Shing Street along the Hing Fong Road to the recycling station. The whole journey is about 620 meters. Most of the time, she chooses to walk through the main road and cross a cars-only conjunction.

The route of Ms Au is mainly on main roads. Her usage of the Recycling Trolley was different from the original design intent. According to the observations, we found that Ms Au did not solely recycle cardboard papers. She recycled all kinds of sundries, including clothes, metal and plastics etc.. She later used the trolley for storage only. 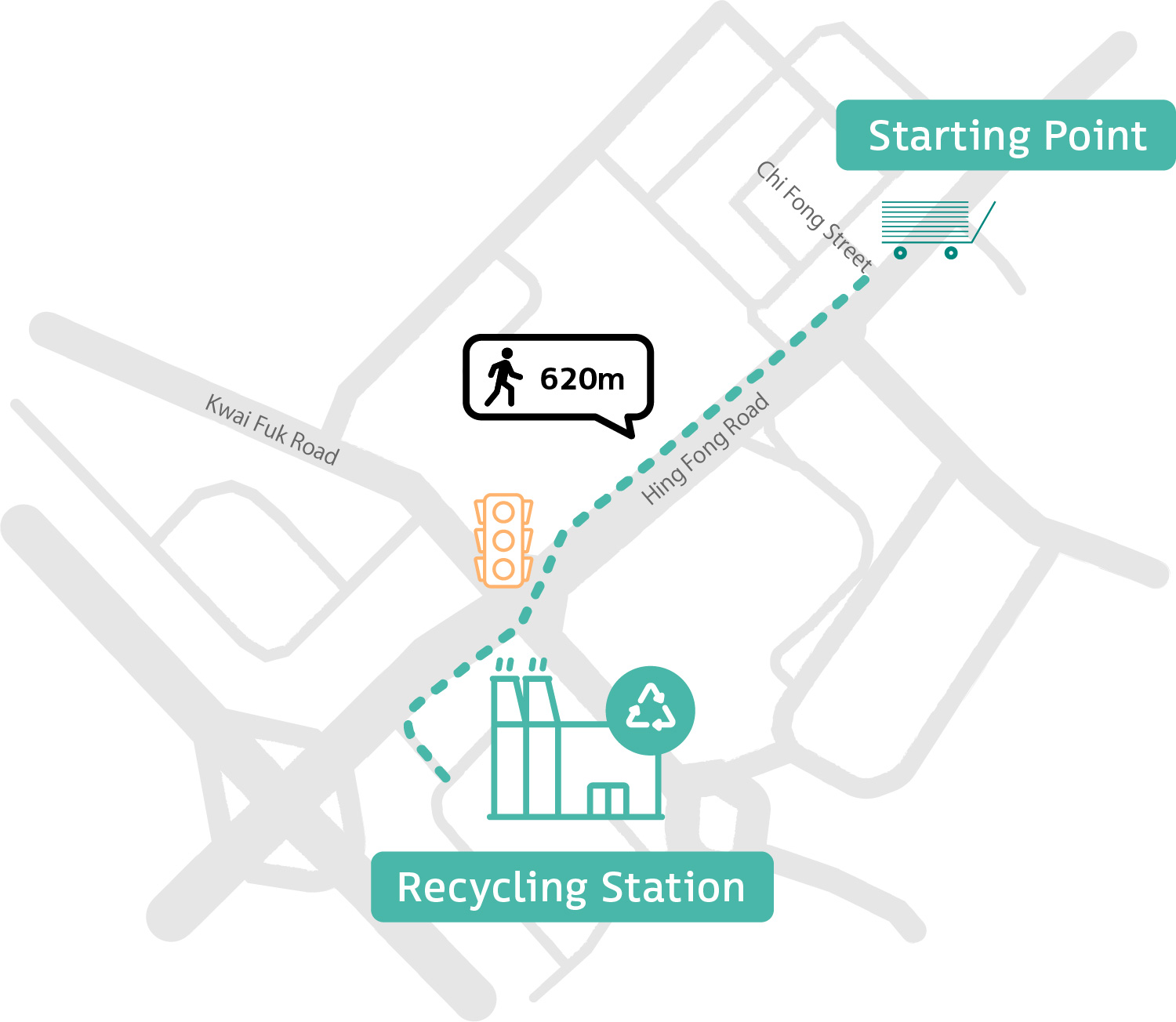 Ms Au is pushing the Recycling Trolley with cardboards

We teach Ms Au how to use the Recycling Trolley.

We show Ms Au how to use different parts of the Recycling Trolley.

The design process and considerations of the Recycling Trolley. 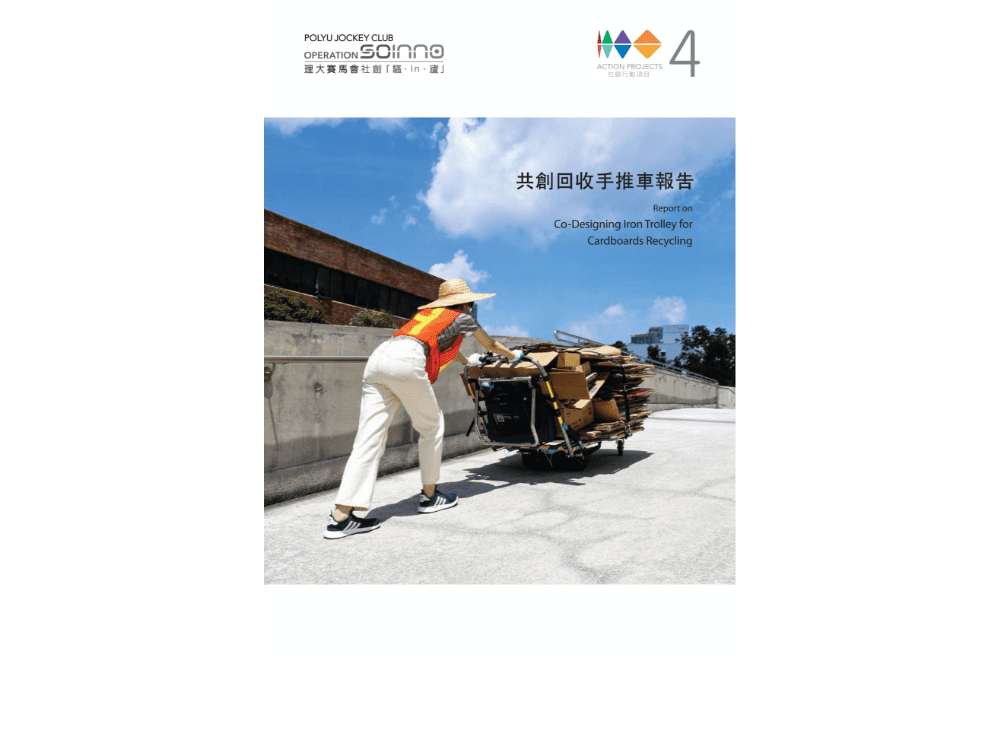 The report has recorded the whole process of co-design and the design details of “Recycling Trolley” for public reference.